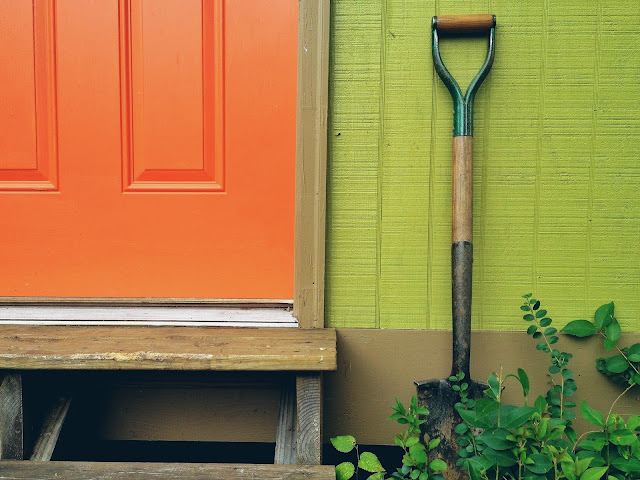 If I have been absent here on the Peregrine Papers it is for good reasons. In addition to being happily consumed at my pottery wheel, I have been finding equal joy digging in the soil of my own back yard. I arrived in Georgia just shy of a year ago, pulling up in a moving truck filled with my humble belongings at the tail end of June. I understood quickly that I wouldn't have much of a chance getting a garden started that late in the summer, though I couldn't help myself from potting a few herbs and a lonely cherry tomato plant that put out approximately 3 pieces of fruit nearing October. I instead put my energy into planning and the first step of preparing my garden for 2015 was to start a compost pile. I found a relatively inexpensive option in a wire mesh cage that I originally set up on the spot where I knew the future garden would be in hopes of getting the soil enriched and also aiding in clearing some of the land. 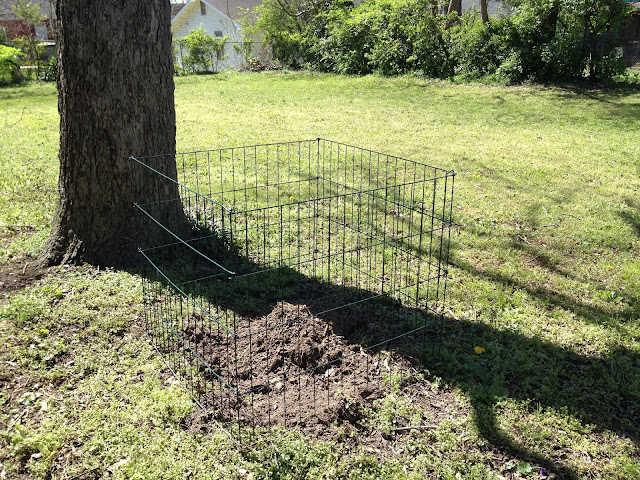 It was also important to me to invest in a compost bucket for the kitchen waste. I found another reasonably priced option in this ceramic, easy to clean, lidded pail that has a sturdy handle and uses filters in the lid to keep in decomposing odors. And it just looks good. In the winter we keep it out on the counter but once it becomes fruit fly season, this things lives in the fridge. 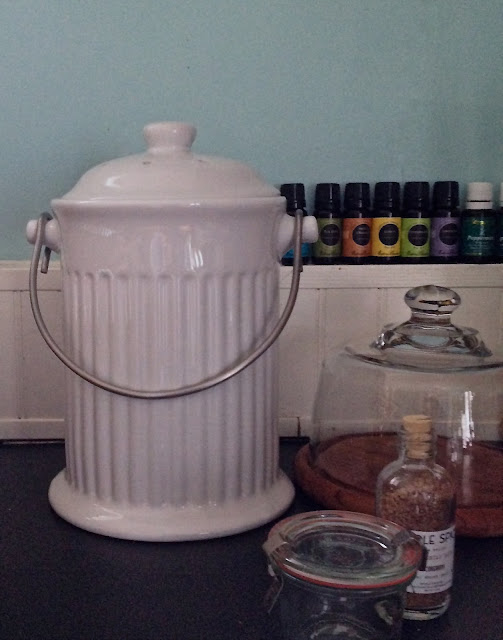 Next up was the fun part, deciding what we want to eat. Starting in March, after much perusing, I found most of my plants and seeds online through Baker Creek. Not only do they have an endless selection, I am a complete sucker for their beautifully illustrated packages. I started some of the seeds indoors (kale, green onions), others went into pots on the back porch (lettuce, arugula), and the rest were going to planted straight into the ground. 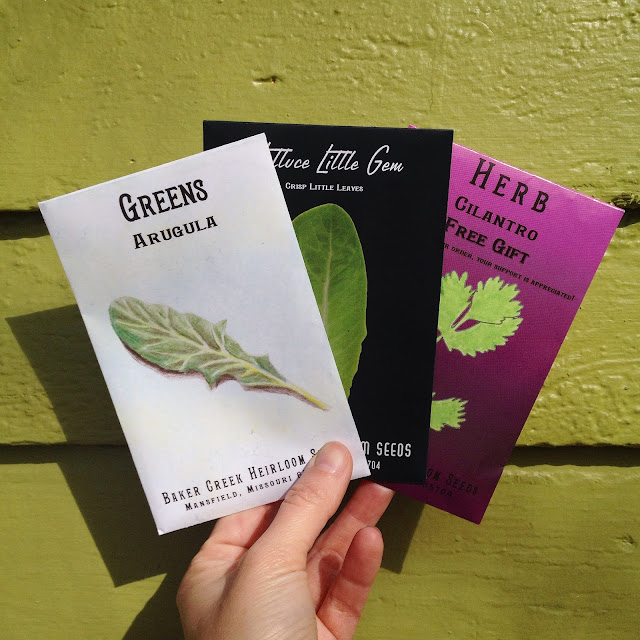 After being clear of the chance of a frost, I was eager to break ground on the garden plot. The first order of business was sifting the compost and moving the cage. Once I had a gorgeous pile of clean compost I measured out the space that the raised bed, I had ordered online, was going to occupy and proceeded to till, rake and turn the ground until it was ready to be framed finding random bits of treasure like bricks, rocks, pottery, shells and old cigarillo filters along the way. I poured in six large bags of garden soil and my compost which only filled the beds about halfway. Before going out to get more soil I decided to keep the level lower so that adding new soil next year would be easy. 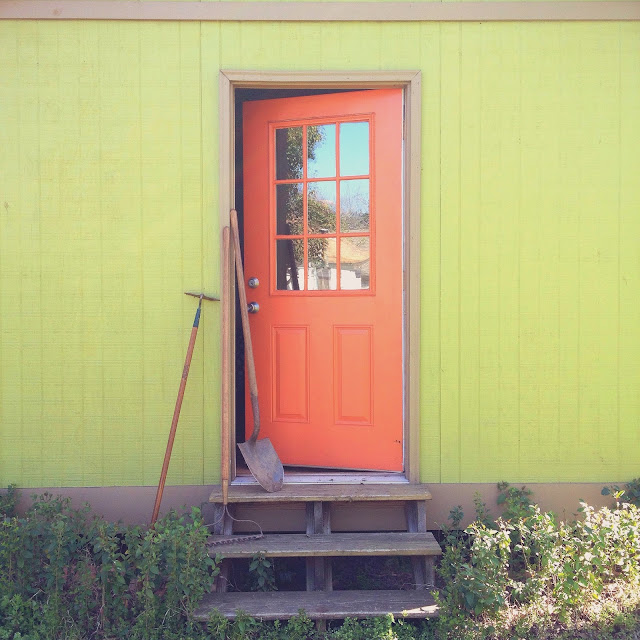 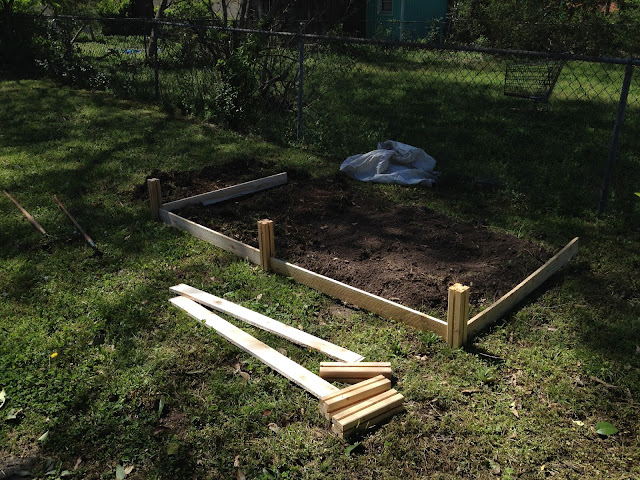 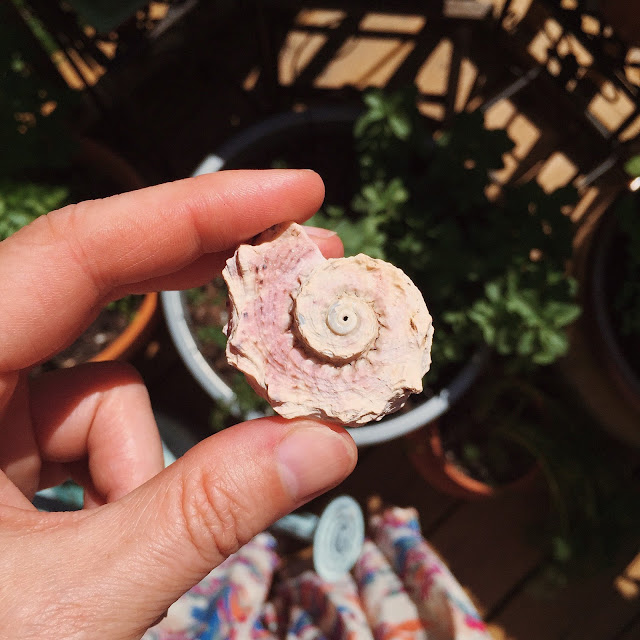 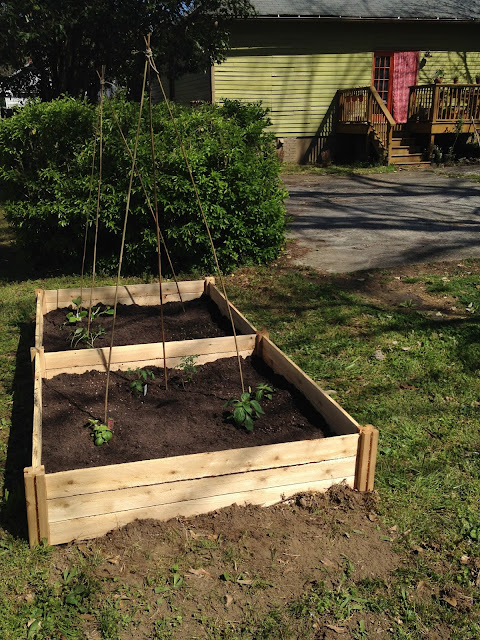 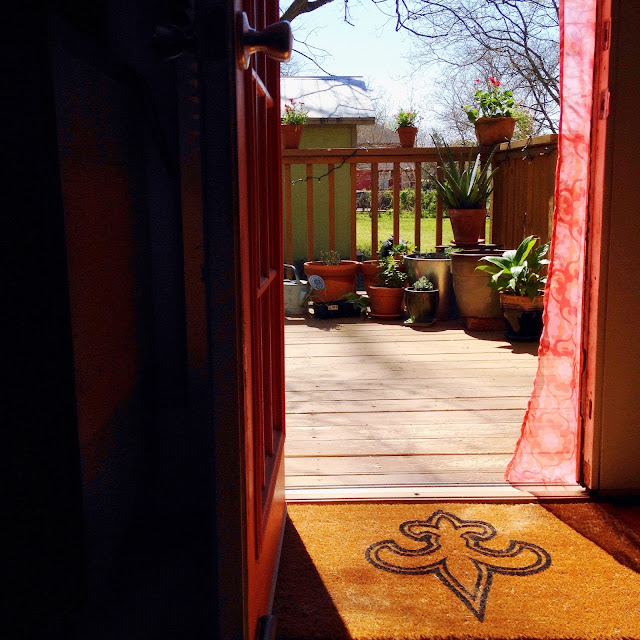 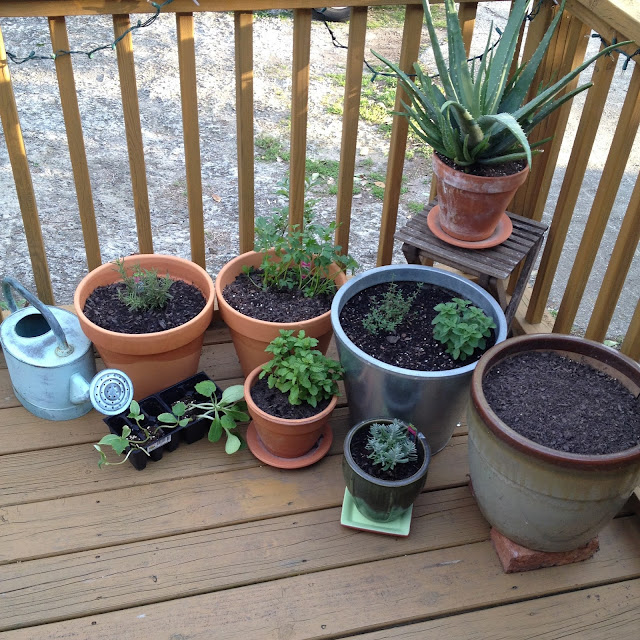 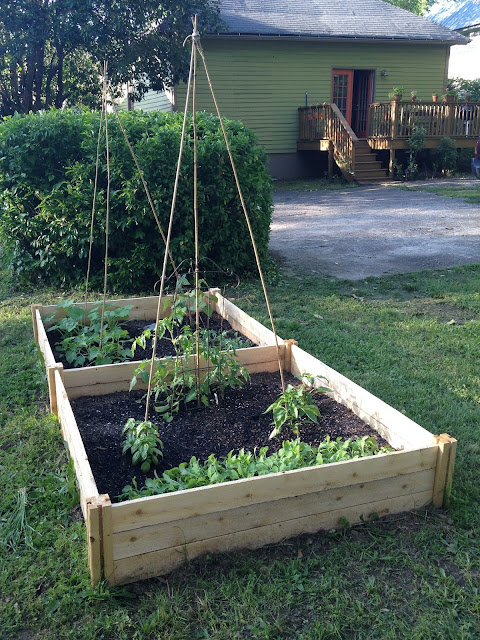 The herbs and lettuces came in fast and I have been enjoying them since April. The first real harvest came at the beginning of May with the gathering of my French breakfast radishes. Even though they grew up small due to my lack of thinning (lesson learned), they are so perfectly sharp and peppery and I have already pickled them following this fast and easy quick pickle recipe I found on Pinterest by Cookie & Kate. The tomatoes and peppers are coming along just fine and we have been happily eating the kale regularly. The beans are wildly reaching for the heavens and just this morning I plucked some zucchini blossoms off for a tasty appetizer to tonight's dinner. If all goes well I will share the recipe with you. Happy gardening! 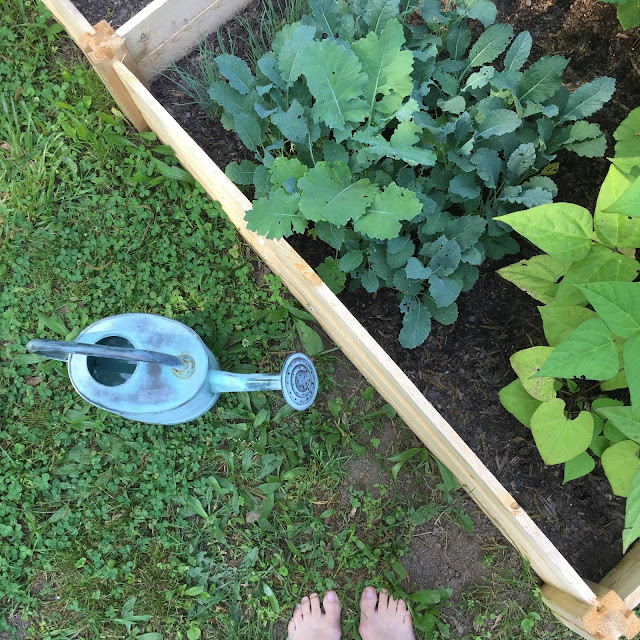 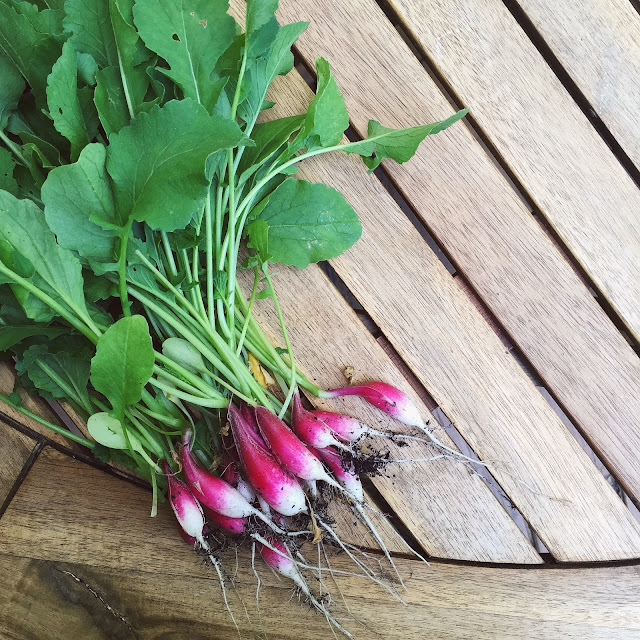 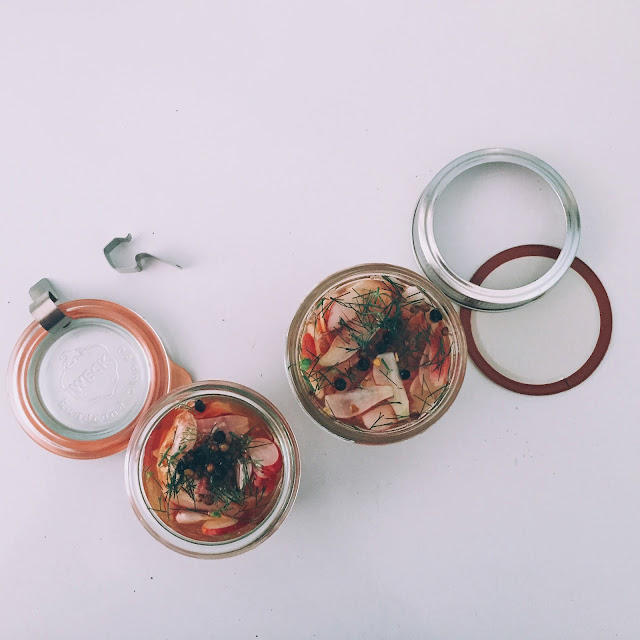 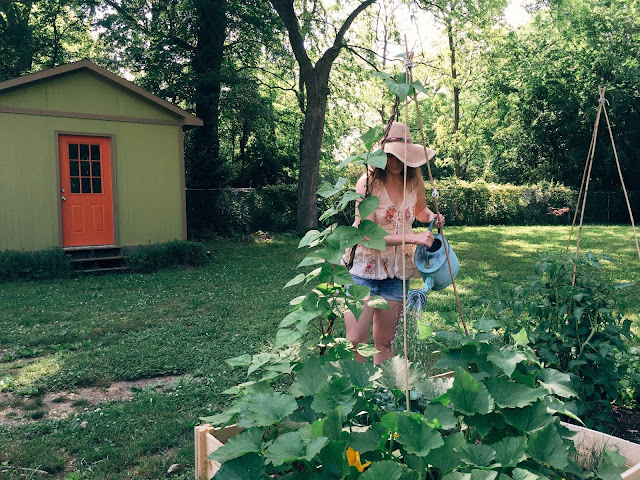 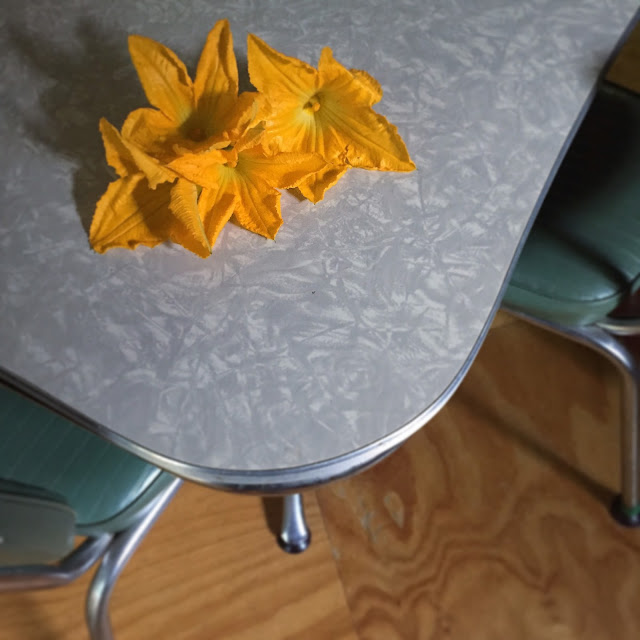 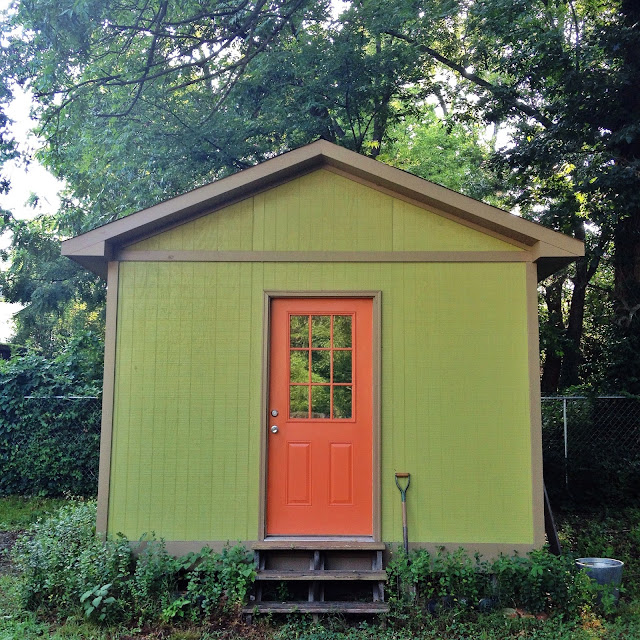 Email ThisBlogThis!Share to TwitterShare to FacebookShare to Pinterest
Labels: projects

Loved this posting. Got caught up in it and lost with memories and loveliness of being there and experiencing most of that. Plus, the fact that those radishes were on my taste buds make it all the more enjoyable! ♥